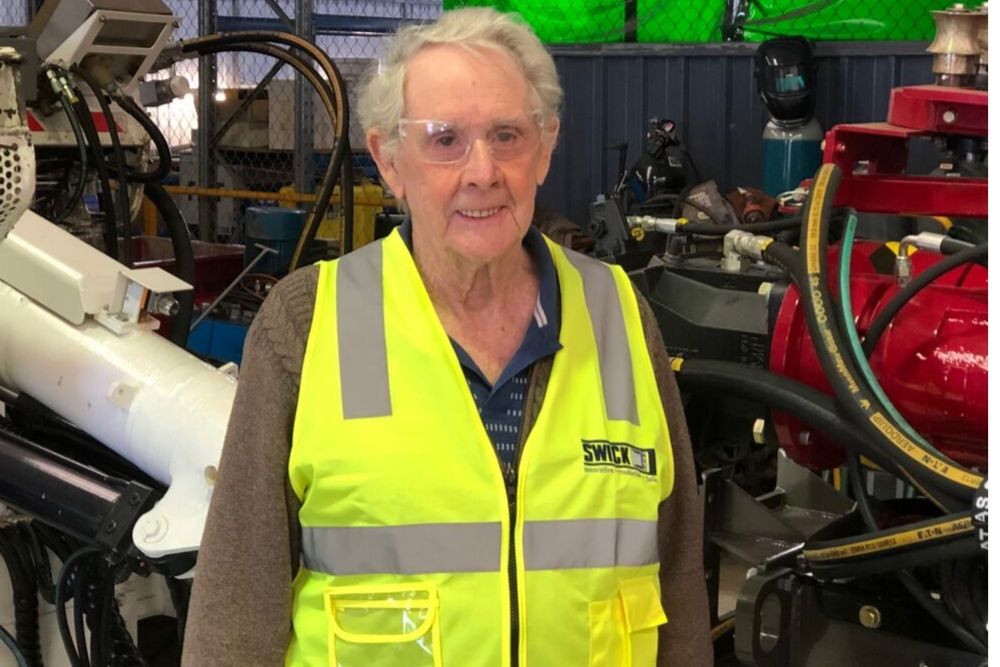 Swick Mining recently sat down with George Horsham, a rugby-mad former diamond driller, to discover what it was like to work on Australian mine sites during the 1950s and 1960s.
Diamond core drilling has advanced in leaps and bounds since the 1950s. With advancements in technology, the state-of-the-art rigs today allow for hole set-ups to be completed within minutes instead of hours, and rig moves can be carried out within hours not days.

Mining had always been in George’s blood – his dad was a diamond driller his entire life. When George turned 16, he got his first taste of the drilling life by taking on a job as his dad’s offsider at a quarry site in New South Wales, not long after the war. And so his drilling career began. George spent the best part of the 1950s and 1960s as a driller working on mines throughout Western Australia including Kalgoorlie, Kambalda, Ravensthorpe and Mount Newman. 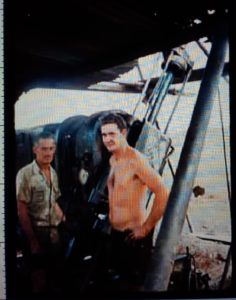 Photo: George (right) with his father

His most notable job was working on the Kalgoorlie Southern Extension in the 1960s. This project consisted of 15 holes drilling down to 9,000 ft deep. The mine was a 24-hour operation with three shifts working eight-hour blocks, six days a week. When George joined the crew, he was tasked to work on the remaining three holes, drilling down to depths of over 6,000 ft, the deepest he’d ever drilled in his career. Back then everything was hands-on.

“Equipment for our rig had to be manually lifted on and off the trucks, and there was no such thing as health and safety in those days. The tripods we had to construct were made of heavy steam pipe. We didn’t have cranes to do the work for us. Our forklifts were two guys called ‘George’ (myself) and ‘Bert’,” said Mr Horsham.

The quickest time George ever took to rig a machine was 12 hours, unlike today, where everything can be set up in a matter of minutes. There was no such thing as wire line drilling. Crews carried out conventional core drilling, which required the entire drill string including the drill rods to be pulled out of the bore hole for every drilling cycle, taken apart and then put back together again.
“You can imagine what that would have been like with 9,000ft of rod!” he said.

“We lived in tents on site full time. We didn’t have air-conditioned comfort like you do today. If we wanted air conditioning, we would need to roll up the side of our tent. Our only relief was getting away to town on the weekend to unwind at the local pub and do our shopping, then we would be back on site the next day,” he explained.

As a highly experienced driller in his day, George later took on roles as a foreman on mine sites, but due to ongoing back pain, he retired from drilling in the 1970s. George’s other passion was on the field. When he wasn’t out on a mine, George loved to play rugby union. While living in Perth in the 1950s, he became a member of the Nedlands Rugby Union Club. More than 60 years on, George is still considered a legend at the club, which is known in rugby circles around Australia as ‘Neddies.’

Heading into the 1957 season, George recalls how the Neddies were known as the ‘easy beats’. They were unfit, losing game after game. And it had been 17 long years since Neddies had won the club’s only first grade premiership flag, back in 1940. It wasn’t until they commenced a dedicated fitness program that George’s team started to turn around their results. So much so, they became Minor Premiers that year and progressed through to the Grand Final.

There was something else in Neddies’ favour in 1957 – a teammate of George’s called Joe Poynton who, some 15 years after his passing in 2004, is still immortalised at Neddies. Joe had played in Neddies’ historic first premiership in 1940 as an 18-year-old. He went on to become a decorated WWII hero before returning to play for Neddies. While sidelined in the semi-final with a broken nose, Joe Poynton took his place alongside George and his Neddies teammates wearing a special brace strapped across his face. The result was an historic 18-8 win to Neddies, the club’s second grand final victory after the 1940 triumph. The 1957 grand final victory rates as one of the fondest memories for George who, at 85, is recognised as one of the club’s oldest living players. George is also well known at Neddies as the club’s unofficial historian, and you’ll often catch him on the sidelines supporting his beloved club. 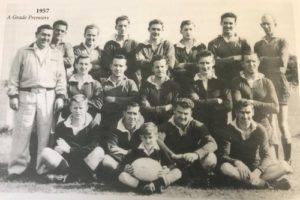 Photo: George and his fellow ‘Neddies’ Rugby team in 1957.

Neddies also has a close and long-running association with Swick Mining, which has been the club’s major sponsor for almost a decade. On most Saturday’s during the season, there are hundreds of Neddies juniors and seniors playing with the Swick logo on the front of their jumpers. George recently toured Swick Mining’s head office in South Guildford, Western Australia and we asked him what he thought of our new underground drilling equipment.

“If I had my hands on that machinery, I would make it talk. If only we had something like this back in my day, it would have made life so much easier. But, you would never have been able to get a machine of that size in the places we used to mine.

“I recall one time working at a mine in Ravensthorpe. We had to cross knee-deep in water. So we cut up a 44 ft gallon drum to act as a boat to cart our equipment in pieces. We would then have to put the machinery back together at the other side,” he said.

George has advice to anyone who’s thinking about becoming a driller.

“This isn’t ordinary work. You need to have a sense of adventure and a willingness to learn and understand the machinery. A good driller will always think ahead so they don’t run into any trouble and are able to think on their toes.” 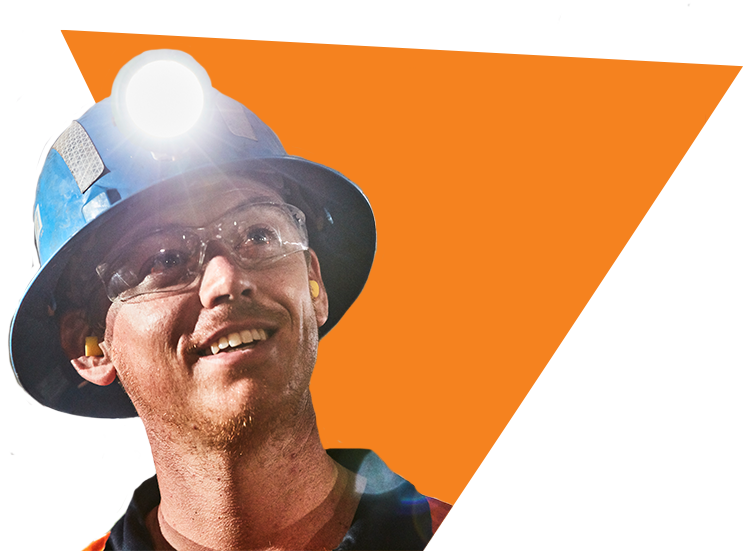